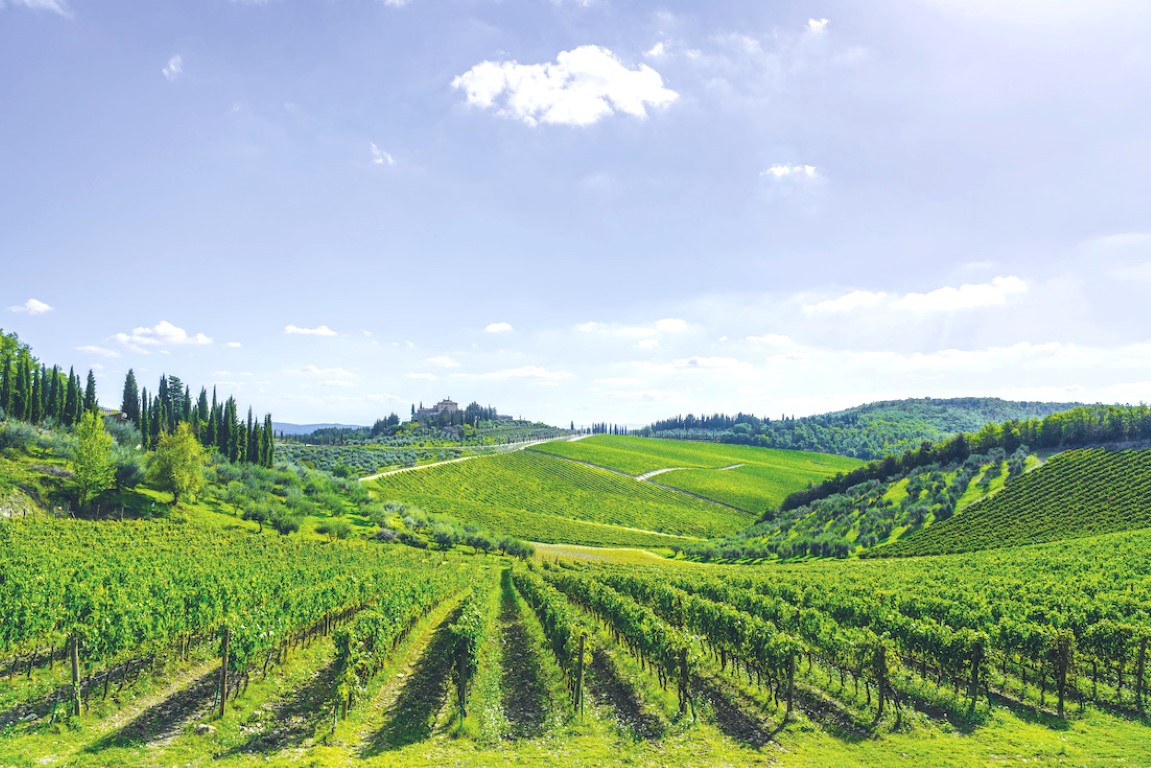 Chianti, is one of the most globally known wines. It is produced in Tuscany, through a large area, composed of different groups of hills, spread across the provinces of Pisa, Pistoia, Prato, Firenze, Siena and Arezzo. Historically, the first Chianti wine production area was officially defined by Cosimo III de’ Medici in 1700.
At the end of the 19th century, Barone Ricasoli invented the chianti formula and made giant steps in the quality of this wine. In 1967 the Chianti DOC, which means the denomination of controlled origin, was created by the Italian government, this was set up to ensure that the Italian wineries followed a set of rules with regards to quality standards. Then In 1984, the Chianti DOCG, which means the denomination of controlled and guaranteed origin was created, to add further qualitative guarantees to production, collection and bottling processes.
The legislative guidelines mean that Chianti DOCG must have a minimum 70% of Sangiovese grapes within the production. If the Chianti DOCG contains 100% Sangiovese, it is called “Sangiovese in purity”. In limited quantities, native grapes, such as, Canaiolo and Colorino, or international grapes, such as, Cabernet Sauvignon, Merlot and Syrah can be added.

Montespertoli
This production area is easily reached driving along the FI-PI-LI regional road and then taking the exit, Ginestra Fiorentina (between Empoli and Signa); and then continuing for a further 15 minutes South / South West, you arrive at the medieval village.

Montalbano
This hilly area is also commonly called “Leonardo’s hills”, because it is located around the borough of Vinci, where the genius Leonardo da Vinci was born, famous in the world for his inventions and works of art, most renowned of all, the Monna Lisa or the Gioconda as it is known in Italy. The Montalbano hills are home to a particular microclimate, thanks to its position between Padule di Fucecchio and the first Apennine mountains around the city of Pistoia.

Colline Pisane
For many centuries this area has been dedicated to the production of quality wines such as, Sangiovese and Trebbiano. The Colline Pisane area includes the villages of Fauglia, Casciana Terme, Terricciola and Santa Luce, which are located in the province of Pisa.

Colli Senesi
This is a large area that includes the beautiful hills and valleys around Siena; starting from the West, Colle Val d’Elsa and San Gimignano, and then eastbound until Val d’Orcia and Montepulciano, which is renowned for its Vino Nobile and Vin Santo, and southbound until Montalcino, where Brunello is produced.

Rufina
Drive along the SS n. 67 road, this is a road which crosses the Apennines and continues to the city of Forlì, in Romagna – notice at the interchange of Pontassieve – there are villages famous for the quality of their wines such as Nipozzano, Rùfina and Pomino. It is said that Giuseppe Verdi enjoyed the wine produced in the Pomino estates; he wrote of this in one of his letters of the time.

Colli Aretini
Following the Valdarno hills in the province of Arezzo, there are several Chianti DOCG producers, along with other important wine denominations such as Cortona DOC and Valdichiana DOC.

Colli Fiorentini
Included here are some farms from the province of Prato, with famous production centers such as Artimino and Carmignano. Travelling through the hills around the city of Florence on the southern side, we get to Pontassieve and continue along the Arno river, here is another important area: Chianti Classico.

Chianti Classico
South of Florence, positioned between Siena and Arezzo, you can find the Chianti Classico hills. Here, there are breath-taking landscapes, with boroughs, fortresses, churches and farm houses, which create a unique mix of nature, history, art, and architecture. In addition there are the inimitable products of Tuscany, famous around the world!

Chianti Classico wine is produced in a terroir, comprising of 70 thousand hectares, it is situated between the cities of Florence and Siena, and includes 8 municipalities:

The brand logo of the DOCG producers in this region is the famous Gallo Nero or Black Rooster. This unmistakable brand, symbol of the Lega Militare del Chianti, is the first ancient military and commercial union of the local city administrations. It has also been painted by Giorgio Vasari and can be found in the Palazzo della Signoria in Florence, on the ceiling of the Salone dei Cinquecento.

THE LEGEND OF THE BLACK ROOSTER
In medieval times, the cities of Florence and Siena often fought one another over the control of the area between the two cities. To bring an end to the continuing conflicts, a decision was made, there would be a competition, to decide once and for all who owned the territory. Each city would be given a rooster and at the sound of the rooster’s crow, one horseman would set off from Florence and one horseman would set off from Siena and where they met would be the new boundary between the 2 rival cities.
Siena chose a beautiful, strong, white rooster, whilst Florence chose a black rooster, which they strategically kept on a strict diet and in complete darkness before the competition.So, on the day of the challenge, the florentine’s rooster was so famished, and starved of light that it crowed before sunrise, unlike the Sienese rooster which had been well cared for, so the Florentine horseman had a major advantage, and set off from Florence, hours before the Sienese horseman. The advantage was in fact so great, that the two horsemen met at Fonterutoli, which is only 12 Km outside of Siena, so the whole territory passed under the administration of Florence**, much to the chagrin of Siena!

** The Duke-down of Siena formally fell on the 3rd of April 1559, with the signature of the Cateau- Cambrésis agreement. Cosimo de’ Medici of Florence, became, with the papal seal, the Grand Duke of Tuscany, thereby also ruling the city of Siena.

THE ROADS OF CHIANTI
An expanse of hills covered by olive trees and vineyards, together with woods of oaks, holm oaks, chestnuts, and in addition the unmistakeable cypress trees, which mark the entrances of villas, churches, and picturesque boroughs.There are two main roads which travel the Chianti hills: SR n. 2 Florence-Siena and the SR n. 222 Chiantigiana, which runs through this unique territory from North to South.

Driving along the SR 2 from Florence, we find the village of San Casciano, elevated to a beautiful position between the valleys of the Greve and Pesa rivers. Inside the Chiesa della Misericordia situated here, there is a wonderful wooden crucifix by Simone Martini, along with other pieces of art. Continuing along, we arrive at Tavarnelle Val di Pesa, within its surroundings are the ancient Badìa a Passignano and Pieve di Morrocco, where you can find some works by Della Robbia. Continuing southbound, we arrive at Barberino Val d’Elsa with its strong city walls which enclose the town hall building, decorated with the coat of arms of the XV century.

Alternatively, travelling the SR 222 route, we arrive at Greve in Chianti, which is a typical tuscan village with a central square, where periodically an open-air market is held. In the square we find a bronze statue dedicated to Giovanni da Verrazzano, an explorer who was born in Greve.

GIOVANNI DA VERRAZZANO
Born in 1485, was an Italian explorer. He moved to Normandy and chose to become a seafarer. He arranged several voyages across the Mediterranean Sea and in 1523 he was appointed, by Francis I, King of France, an exploration to the United States East coast to discover a route to the Pacific Ocean. Other European explorers touched the Northern American coasts, among which the Spanish in Messico and the Italian Caboto Brothers in Canada, but Giovanni da Verrazzano was the first European to explore the atlantic coast of the current United States and to reach, what was to become the bay of New York, on the 17th April 1524.
For a long time, the discovery was ascribed to Henry Hudson, despite the fact that Verrazzano had been the first to register a cartographic survey of the river flowing around the island of Manhattan. This fact was officially acknowledged in the 60’s, therefore a NY bridge was re-named in his honour. Moreover, on the 17 April every year, the Verrazzano Day is celebrated in New York and in Tuscany at the Verrazzano Castle in Greve in Chianti.

The Chianti territory is rich with legends, stories and news that it’s practically impossible to exhaust all of the subjects in just the one article, perhaps an encyclopedia would be better!
So, if you like this article, please follow our blog and social media accounts (Come and See Italy, on Facebook, Instagram and YouTube).
You can also subscribe to our Newsletter, and receive the lastest news on this fascinating territory, the excursions we arrange which can be tailored to your specific requirements!